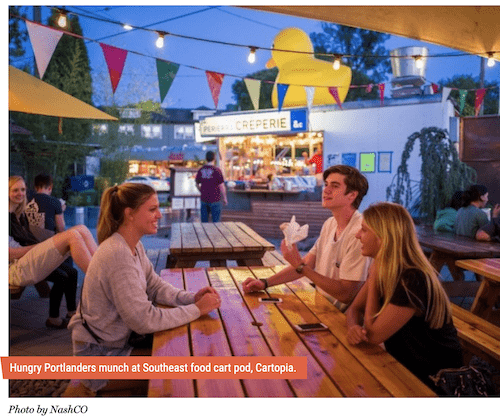 Fifth Avenue
Set on the MAX line, the Fifth Avenue pod sates downtowners’ daytime appetites with offerings like Korean tacos or Asian-fusion rice bowls at Korean Twist, and myrid other cuisines, including Indian, Thai and Egyptian.

Third Avenue
The Third Avenue pod includes the popular DC Vegetarian, known for its vegan and vegetarian burgers and sandwiches, as well as carts offering cuisine from Mexico, Egypt, Thailand and Vietnam. Once you’ve got your meal, stroll to Waterfront Park and pull up a bench (or spot of grass) — instant picnic!

Cartopia
A favorite of late-nighters, Cartopia hosts Potato Champion, which dishes up crispy, twice-fried Belgian-style fries and gravy-doused poutine (pretty much perfect post-drinking food). Pyro Pizzadelivers beautifully singed pizzas from a wood-fired oven. Night owls flock to Perierra Crêperie for Nutella-banana or avocado-cream-cheese-and-turkey crêpes, while Chicken and Guns heats up the night with its wood-fired Latin chicken, served with crispy, sea-salted potatoes and an addictive Peruvian sauce made of cilantro, jalapeños and sour cream.

Across the street from Cartopia is Lardo, one of the city’s many cart-turned-brick-and-mortar success stories. Stop in a for a decadent sandwich (mortadella and mozzarella, cold fried chicken) and try to save room for dessert from the Hungry Heart Cupcakes cart on-site.

The pod is anchored by brick-and-mortar German pub Prost, where you are welcome to eat your cart meal if you buy a drink. (Lagers go great with bulgogi burritos!)

Cartlandia
The Cartlandia “super pod” in Southeast Portland is home to The Blue Room, a full-service bar with 18 beers and ciders on tap, and a family- and dog-friendly outdoor beer garden. More than 30 carts representing 15 different countries include a Voodoo Doughnut mobile van and three carts serving lobster.

From breakfast to dessert, Portland’s eclectic food carts have diners’ cravings covered, all over town.

Breakfast
Rise and shine any time you please with the all-day breakfast sandwiches available at Fried Egg I’m In Love. This cart on Southeast Hawthorne Boulevard features a tasty array of music-pun-themed offerings, like the signature Yolko Ono, the spicy Sriracha Mix-A-Lot or the vegetarian Back in Black Beans.

On culinary destination Southeast Division Street, Smaaken Waffles reinvents the breakfast classic, turning it into a vessel for delightfully diverse fillings. Sandwiches on their thin Dutch waffles include combinations like sausage, egg and cheddar; ham, Swiss, house-made strawberry jam and powdered sugar; and the Smaaken: apple, brie and bacon. (The cart also offers gluten-free waffles and vegan and vegetarian sandwiches.)

If you’re more in the mood for a slice, Pyro Pizza has managed to cram a brick oven into its cart in the Cartopia pod, where they wood-fire margherita and puttanesca pies that are sized perfectly for sharing or hoarding.

Dinner
To satisfy a range of cravings, head to the Portland Mercado in Southeast Portland’s Foster-Powell neighborhood. Outside of the market is a row of rainbow-colored food carts, each serving up its own traditional recipes infused with Portland flair. Dig into stuffed arepas and friend yucca at Colombian cart Que Bacano, or sample specialties from its neighbors, who are serving up dishes from Mexico, Cuba, Argentina and El Salvador.

Snacks & Treats
A sweet or savory substitute for any meal (or good as a snack), the waffle sandwiches at Flavour Spot will have you wondering why we ever used bread to begin with. These delicious handfuls come in varieties like ham and Gouda, sausage and maple, or even Nutella and raspberry jam. Advice: Ask for extra napkins.

Each listing, no matter the platform, has a unique listing URL.

You’ll find it in your browser or dashboard of the platform you’re using.

Base price is typical nighlty rate. You can adjust the rate for seasonality, holidays and weekends.

We have FabStayz powered by Houfy videos and easy to follow instructions to assist!

While all hosts and accommodations have agreed to nondiscrimination policies from other platforms and must adhere to local, state and federal guidelines, FabStayz requires that featured hosts acknowledge and agree to the FabStayz Diversity & Inclusivity Pledge..

FabHosts have minimum hosting experience of 7 months with 12 great to excellent reviews.

I welcome LGBT+Ally guests and individuals regardless of race, ethnicity, religion, sexual orientation or gender identity, to be themselves with no anxiety or fear of judgement as I foster a hosting environment of respect and inclusivity.

to track visits to our site. Agree to our pastry policy?

This website uses cookies so that we can provide you with the best user experience possible. Cookie information is stored in your browser and performs functions such as recognising you when you return to our website and helping our team to understand which sections of the website you find most interesting and useful.

Strictly Necessary Cookie should be enabled at all times so that we can save your preferences for cookie settings.

If you disable this cookie, we will not be able to save your preferences. This means that every time you visit this website you will need to enable or disable cookies again.